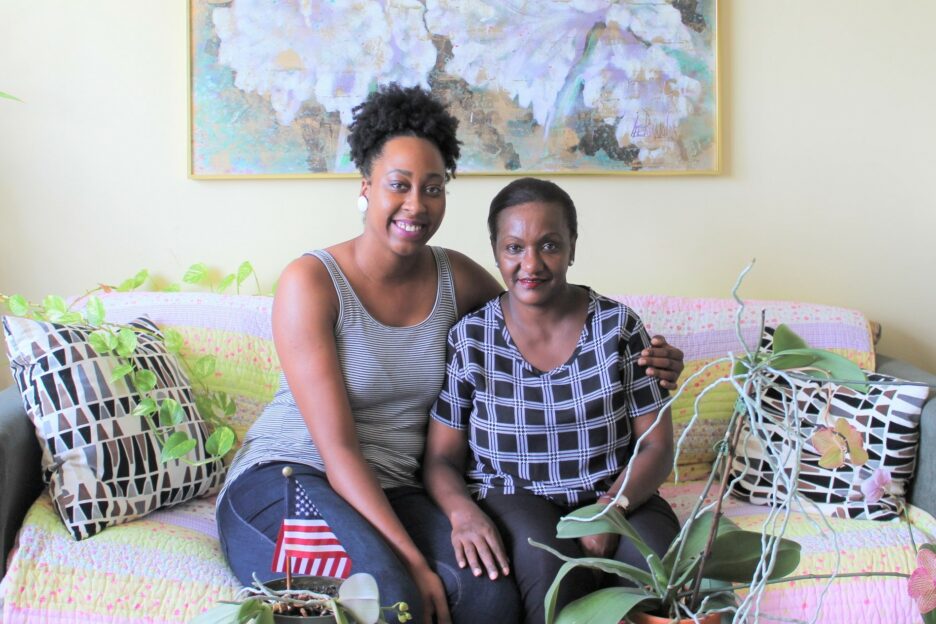 Ms. H tops out at 5’ 1” and is very reserved – Akira is over 6 feet tall, outgoing, and ready to talk. Together they make a lovely pair and friendship.

Ms. H. came to the United States over a decade ago from Ethiopia where she had been a medical doctor. She doesn’t like to talk about why she emigrated but does say that she wished to have “a better life.” Unfortunately, a better life was hard to achieve. She worked for a time as a CVS cashier and was able to afford rent for a small apartment. But she got sick several years ago which led to her missing a lot of work. She then lost her job and was evicted when she couldn’t pay rent.

Ms. H. first became homeless 4 years ago. Somebody told her about the Alexandria Community Shelter, and she went there while New Hope Housing was operating that program. It took nearly six months at shelter before a vacancy became available in a permanent supportive housing program. Not long after Ms. H moved into her new apartment, her illnesses, both physical and mental, became worse.

Akira had just joined New Hope Housing’s staff in 2016 when she was assigned to become Ms. H.’s case manager. Within a few days, Ms. H. was hospitalized for her sickness and would remain in the hospital for 6 weeks. She refused to see Akira when Akira went to visit her the first week. Akira continued to stop in every few days to say hello and offer encouragement and was turned away several times. But she drove that hour each way to visit. After a few weeks, Ms. H. agreed to speak with Akira. They began to bond, and by the end of her hospital stay, she let Akira take her home.

Ms. H. was surprised and relieved to return to her own apartment. She had feared that she would be moved because she had been gone so long. Her roommate greeted her warmly and she settled back in.

Over the next few years, she continued to recover. Two years ago, she began working at the Mark Center on the custodial staff. She continues to work there and gets good reviews from her employer.

Ms. H. is very focused on the present. She wants to take care of her health and pay her rent on time. She told us recently that she has no current plans to try to get certified here as a doctor because the process is too intense. She says she has simple goals: “I want to live by myself and not have to rely on a program for help.”

She has friends that she met through the Wellness Center and through work. Ms. H. says she likes when they can go out and get dinner together. She recommends Tsedey in Alexandria for quality Ethiopian food.

Akira is proud of her. “I love to see that she’s maintained her health and that she’s now a happier version of herself. She’s the sweetest lady ever and has such a good spirit.”

While everything above may sound simple, achieving this simplicity was hard work. Ms. H.’s illnesses could have consumed her, but she accepted help and worked the program that doctors gave her. She sees her counselors and takes her medication.

Ms. H. wanted to work – she got her job on her own. She went to the Wellness Center and worked with staff there who connected her to her current employer. She began as a part-time worker but quickly was promoted to full-time because of her strong work ethic.

Seeing the two of them together, talking on the couch, laughing and sharing memories is such a wonderful reminder of the friendships that can arise between very different people and the value of having the right people in human service work.

Thank you for your support that allows for long-term care, that allows people to heal and rejoin their community when they are ready to!